Urine often has a high concentration of particles and low content of water. This is referred to as high osmolality. Urine osmolality has a direct effect on catheter lubrication and plays an important role for people who use hydrophilic catheters. Catheters with a surface osmolality in balance with urine is key to reducing withdrawal friction.

The LoFric catheter is characterized by the Urotonic™ Surface Technology. This means that the catheter has a surface layer isotonic to urine, i.e. the salt concentration of the catheter’s surface is in balance with the urine. Isotonic osmolality prevents removal of the hydrophilic coating from the surface. This is essential for keeping high lubricity and minimal friction between catheter and urethra during the entire catheterization process, including at withdrawal. According to peer-reviewed data, LoFric with the Urotonic Surface Technology, is the only available hydrophilic coated catheter that could demonstrate high osmolality (i.e. ~900 mOsm/kg58) that corresponds to osmolality levels normally present in urine (i.e. 800-1200 mOsm/kg4 5). This may be one contributing factor to the low complication rates associated with long-term LoFric use found in real-life evidence.6 A recent meta-analysis has identified a unique hematuria risk reduction of 48%, only applicable for the LoFric-brand.7 8 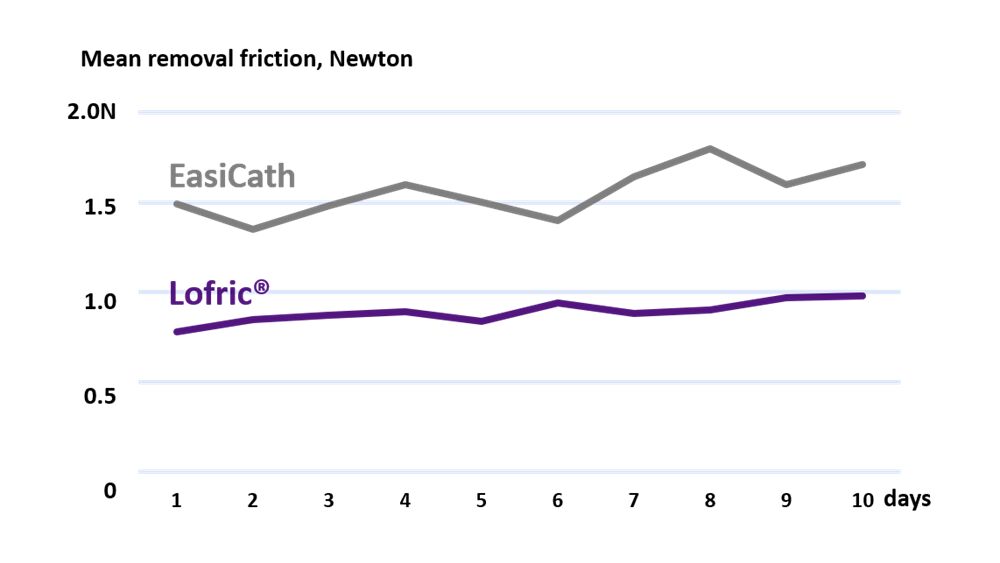 Graph based on results published in Waller et al. 1997