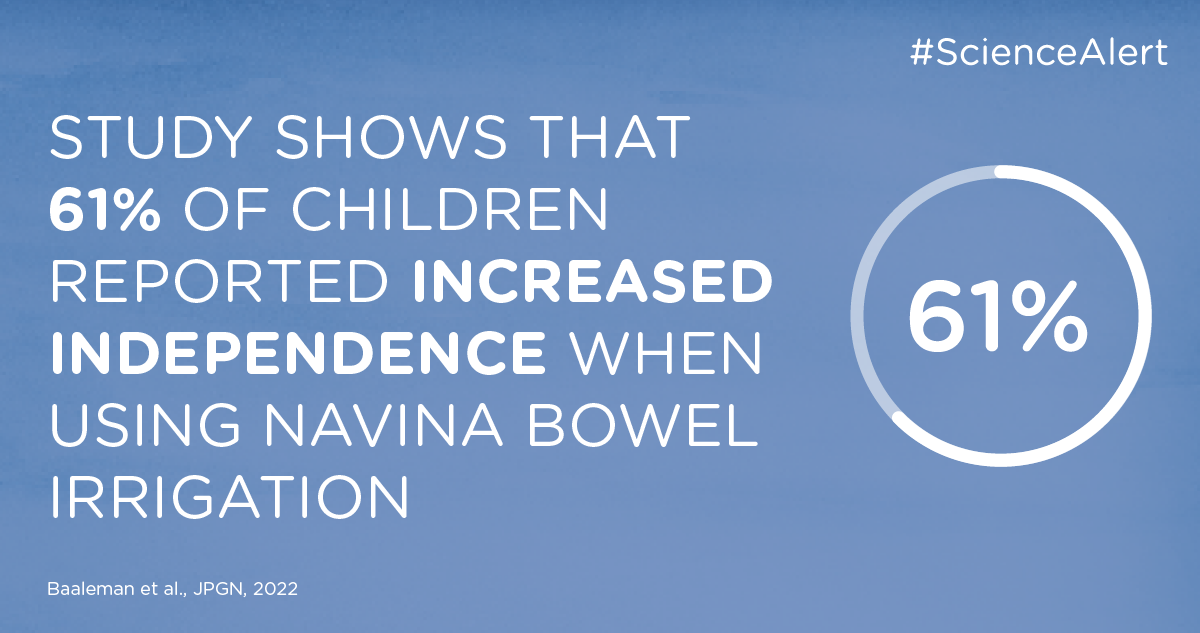 What Can Cause Chronic Constipation in a Child?

Chronic constipation in children and adolescents is a common disorder that is characterized by infrequent, painful, hard stools and may be accompanied by fecal incontinence and abdominal pain. If no organic cause can be found for the defecation disorder the diagnose is functional constipation which is approximately 95% of the cases. Organic causes of constipation can be Hirschsprung disease or neurogenic bowel dysfunction (NBD) such as Spina Bifida.

How To Treat a Child With Chronic Constipation?

Treatment of constipation in children usually starts with demystification, education, toilet training, and laxative treatment. If this bowel care protocol fails, minimal invasive treatment, such as TAI is recommended to improve the disordered defecation. TAI for bowel management means that a large volume of water is used to irrigate rectum and the lower part of the colon with a bowel irrigation system. To facilitate TAI for bowel management, several transanal irrigation systems have been developed including an electronic bowel irrigation evacuation system. In this study, the use of Navina Irrigation System was investigated.

Previous gastroenterology studies on TAI as a treatment for bowel dysfunction have shown high rates of success, both in clinical outcomes and in improvement of health-related quality of life (HRQoL) when using TAI for functional constipation in children. The results from this study support the previous reports and shows that at median 3 years after initiation 73% were still using Navina Irrigation System and treatment success rates significantly improved compared to baseline at 1-month and 6-month follow-up and improvement persisted at cross-sectional follow-up. The authors concludes that Navina Irrigation System are an effective treatment for bowel dysfunction in children with constipation.

How To Control Fecal Incontinence?

How To Help a Child With Chronic Constipation?

Quality of life is affected in children with constipation and overall, the children in this study report similar quality of life improvements as measured with PedsQL scores, or even slightly higher PedsQL – GI scores, compared to other studies in children with functional constipation. To find out how satisfied the children were with the use of Navina Irrigation System the Treatment Satisfaction Questionnaire for Medication was used and the children were very satisfied (72%) or somewhat satisfied (28%), this did not significantly differ between Navina Classic and Navina Smart.

New science news reported in this study is that factors such as patient independence, patient experience, and patient empowerment were also investigated. The majority of children (61%) reported that since use of Navina Irrigation System their independence increased, and the use was considered easy or very easy by 94% of the children. Patient empowerment was measured with the Gothenburg Young Persons Empowerment Scale (GYPES) that showed similar levels as reported in children with other chronic conditions. However, more than half of the children found the use of TAI bothersome and the most bothersome was the time it takes.

Is TAI Safe To Use in Children?

In this clinical study adverse events were uncommon and, the most commonly reported was abdominal pain during the TAI procedure.

To conclude, TAI with Navina Irrigation System is an effective bowel management system for children with constipation or fecal incontinence associated with relatively high levels of HRQoL. An increase in independence was reported since TAI use, and perceived effectiveness was high. Although the TAI procedure may be perceived as time-consuming and inconvenient, the authors states that TAI should be considered as treatment option for children with constipation unresponsive to conventional medical treatment before more invasive surgical treatment is initiated.